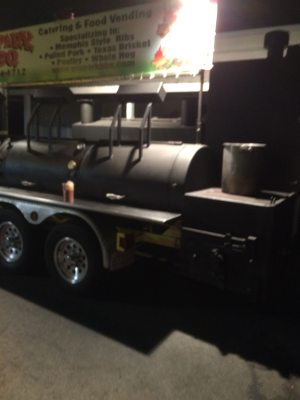 Pig Park BBQ, of Ware, MA was an interesting experience. It consists of a guy, with a smoker, on the side of the road. He has a single plastic table that seats four, sitting out next to the stand. As you might expect, this is more of a take out sort of place. While we were eating there, at least 4 other cars came, ordered and went. We spoke briefly with the owner, who told us that he is there year round (provided he hasn't taken his mobile smoker to an event); snow doesn't faze him! While I applaud his tenacity, the lack of indoor dining means for distant travelers that winter is simply not an option.

I was excited to try his pulled pork, since his sauces were very North Carolina inspired. Alas, he was out of the pulled pork so I settled on ribs and brisket. I won't say much about the brisket except to say pass on it. It tasted like a very tender pot roast, that is I didn't taste any smoke or rub on it whatsoever. Disappointing. The ribs on the other hand were excellent! They were very tender. If you don't like the "fall off the bone" ribs you might disagree with me, but I thought they tasted great. They had just the right taste of smoke and seasoning. I'm not sure if he used a rub or something else, but I'd definitely recommend them. The sides were good, but nothing to brag about. I really hope to try this place again, hopefully when they have pulled pork.

Apologies for the picture. It was so dark I had a hard time getting a picture of anything. This was the best of the lot
BBQ
Brisket
Ribs